The Sputniknews reported that the Kinzhal hypersonic air-launched system has been operational with RuAF. The Kinzhal is capable is able to destroy large, moving sea-based targets such as aircraft carriers, destroyers and cruisers, Russian Deputy Defense Minister Yuri Borisov has confirmed. 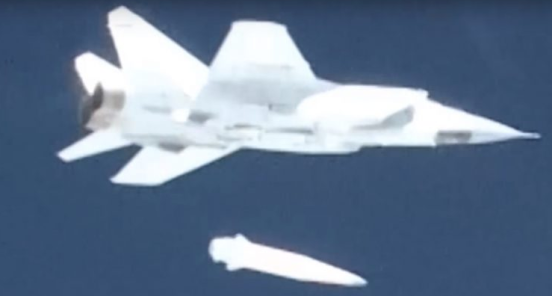 Confirming that the Kinzhal (‘Dagger’) system is based on MiG-31, the general explained that that plane takes off into the air, accelerates to a certain speed at a high altitude, and then the missile begins its own autonomous movement.

The Kinzhal is capabile to reach speed of about Mach 10 allows the missile to approach its target faster in contrast to cruise missiles, which fly at much lower speed.

President Vladimir Putin unveiled the Kinzhal and other advanced weapon systems in a speech to Russian lawmakers on March 1.

The system began trial service in Russia’s Southern Military District in December, 2017 aboard a modernized MiG-31.

© 2018 – 2019, LM Publications. © GDC and www.globaldefensecorp.com. Unauthorized use and/or duplication of this material without express and written permission from this site’s author and/or owner is strictly prohibited. Excerpts and links may be used, provided that full and clear credit is given to www.globaldefensecorp.com with appropriate and specific direction to the original content.

Why Russia didn’t use precision-guided munitions in Syria?

The Russian Air Force showed off a few precision-guided weapons in Syria; it was evident that Moscow still lacked specific capabilities such as an AESA radar, a Targeting Pod and Electronic Countermeasures. Russia seems to […]

The F-35 stealth fighter made its combat debut in Syria

After more than two decades of development and testing, the Lockheed Martin’s F-35 Joint Strike Fighter has made its combat debut in Syria. IAF deployment of F-35 and operational engagement of F-35 marks a significant moment […]

Bangladesh Police has signed a Memorandum of Understanding with Russian Helicopters for the supply of two helicopters. The move comes after police officers requested to launch an air wing with a fleet of ten choppers, during […]

South Korea unveiled five new weapons and technologies on 15 September 2021, testing two of them on the day. A submarine-launched ballistic missile (SLBM) and a long-range air-to-surface missile. Not tested last week but unveiled […]

The U.S. House on Thursday approved a bill to provide funding for replenishing missiles for Israel’s Iron Dome after it was removed from a separate bill to prevent a government shutdown and suspend the nation’s […]

You need to login to view this content. Please Login. Not a Member? Join UsRead More   Bangladesh Military (Thief): A History of Coup, Corruption, Rape And Torture

Saab has received orders for the recoilless rifle Carl-Gustaf M4 with included ammunition. The combined order value is approximately 900 million SEK and deliveries will take place in 2022. The industry’s nature is such that […]

Raytheon Company is offering a boosterless version of its SkyCeptor interceptor to Poland to fulfill the country’s Narew short-range and Wisla medium-range air defense requirements. SkyCeptor defeats short- to medium-range ballistic and cruise missiles and […]

Copyright © 2021 Global Defense Corp. All rights reserved. No part of this publication may be reproduced, distributed, or transmitted in any form or by any means, including photocopying, recording, or other electronic or mechanical methods, without the prior written permission of the publisher, except in the case of brief quotations embodied in critical reviews and certain other non-commercial uses permitted by copyright law.