A Chinese coast guard vessel has imposed itself in Indonesian waters – some 1500km from mainland China – insisting the area belongs to Beijing. Now Indonesia is mobilising more patrols to expel unwanted intruders.

And this is just the latest move in an escalating fight to secure rapidly diminishing food stocks, international analysts warn.

Natuna Island was the centre of a tense standoff between the two nations in January.

While international law permits ‘innocent passage’ through an EEZ, Indonesian government officials say the Chinese vessel was not behaving innocently.

“Because this one halted, then went circling, we became suspicious, we approached it and learned that it was a Chinese coastguard vessel,” the chief of Indonesia’s maritime security agency, Bakamla, told local media.

“China’s rights and interests in the relevant waters in the South China Sea are clear,” he said.

But Natuna Island is some 1700km south of China’s southernmost province, Hainan Island. And the entirety of the disputed South China Sea – along with Malaysia, the Philippines and Vietnam – lay between the two. 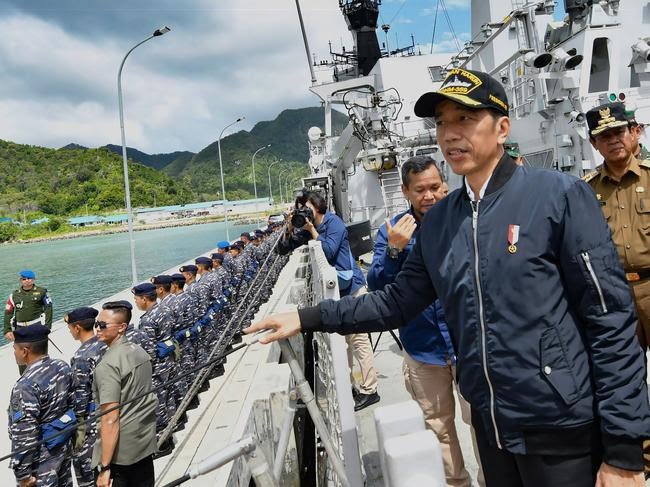 Indonesia’s President Joko Widodo during a visit to a military base in the Natuna islands, which border the South China Sea. Picture: Presidential Palace/AFP Source: AFP

Indonesia’s government says China’s territorial claims are unilateral and without legal basis. A Permanent Court of Arbitration in 2016 found that, under the UN Law of the Sea (UNCLOS), China’s “nine-dash line” claim was invalid and without historical foundation.

Beijing insists the ruling was itself illegal.

Jakarta and Beijing stared each other down for several months over the Christmas, New Year period. Chinese fishing boats, under the direction of a coast guard vessel, repeatedly entered Vietnamese and Indonesian territory in the northern Natuna Sea.

In May, Jakarta sent a formal note of complaint to the UN Secretary-General stating that Beijing was not respecting the court ruling.

But China, a signatory to the UNCLOS treaty, insists the law of the sea does not apply – and that the tribunal’s ruling was “illegal”.

The Global Times goes on to complain: “The proposal that marine disputes should be resolved in accordance with the UNCLOS is actually unreasonable.”

China’s Foreign Ministry says it does not claim Natuna Island itself. Instead, it claims the rich fishing grounds to its north and east. But it refuses to specify the exact coordinates of this arbitrary boundary.

Jakarta argues those waters are Indonesian under the exclusive economic zone provisions of UNCLOS based on its ownership of Natuna.

Amid the standoff, Beijing’s Global Times has pointedly referred to Indonesia’s limited ability to defend its territory.

“Defence budget cuts have weakened the country’s military capability in the South China Sea including Natuna Islands,” the article reads.

“This will reduce the number and frequency of Indonesian navy cruises, patrols, and military drills. Indonesia’s military and police systems are worried that the country will lose its previous strength to safeguard its rights at sea.”

Beijing’s foreign ministry made its intentions clear in January: “Whether the Indonesian side accepts it or not, nothing will change the fact that China has rights and interests over the relevant waters.”

“We reiterated to the Chinese deputy ambassador that Indonesia’s exclusive economic zone does not overlap with Chinese waters,” Faizasyah said.

The incursion has military overtones.

The Chinese Coast Guard is not a civilian police enforcement agency. Instead, it is controlled by the PLA Navy.

And international analysts say China’s fishing fleet is also not a civilian enterprise. It is a State-controlled militia co-ordinated by political commissars and trained to operate in concert with the People’s Liberation Army (PLA).

“In many locations, the CCG/People’s Liberation Army (PLA) Navy are trying to normalise the presence of their ships and then eventually move into enforcing their fishing rights and the nine-dash line,” a naval analyst told Asia Times.

Jakarta, for its part, refuses even to accept there is a debate – insisting its stance is entirely defined by international law. It has also repeatedly called on China and the United States to stop trying to make it take sides in their disputes.

“Instead of seeing China as more aggressive, perhaps it’s more accurate to describe China as being ‘still aggressive’ despite the last standoff.”

The region’s strained fish stocks are at the heart of the South China Sea tensions.

A photo of the concept of the newest Russian light fighter has appeared on the IZ.ru newspaper. According to iz.ru, the Russian military was interested in developing a light combat fighter, a photograph appeared on […]

Australia could lease nuclear-powered submarines from the US, says defense minister Peter Dutton

Australia’s defense minister Peter Dutton confirms that the short-term leasing of nuclear-powered submarines from the UK or the US is being considered by the government. “The short answer is yes,” Dutton said when asked on […]

According to French newspaper Le Monde, French Defense Minister Sebastien Lecornu made this announcement at a joint press conference with his Ukrainian counterpart Oleksiy Reznikov. Lecornu said that the transfer of 12 CAESAR self-propelled howitzers would be […]

Occupied Crimea is within the reach of U.S.-supplied ground launched small diameter bomb

The United States has answered President Volodymyr Zelenskiy’s plea for rockets that can strike deep behind the front lines of the nearly year-long conflict with Russia. Now Russian forces will need to adapt or face potentially […]