In modern warfare, combatants are able to intrude into enemy airspace to strike directly at civilian targets with little warning. This ability will only increase with time.

We can, therefore, see how it is critically important for the Bangladesh Air Guard (Force) to have the ability to anticipate, pre-empt, and respond to such threats to its people, military, and civil infrastructure. 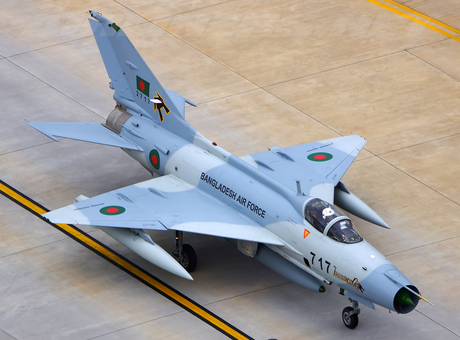 Since the inception of air warfare, the inherent characteristics of speed, reach, and flexibility mean that air power is the first line of defense against any threat posed by a rogue nation or terrorist organisation.

As such, we need to consider the possibility that we are flying “strategically blind,” given that we are living next to a hostile aggressor who does not respect human rights, democratic values, or regional harmony.

As a uniformed military organisation, it is BAF’s duty to be at the front-line of our nation’s defense.

Read More Bangladesh airspace can belong to anyone who wants it

Significant emphasis should be given to developing the workforce, technology, and war-fighting capabilities. BAF must place greater emphasis on ensuring their personnel can exploit the full potential of our future platforms and systems. This requirement will extend to the existing leaders of BAF becoming the practitioners of the high-tech war machine in the information age.

A history of prosecution

BAF currently does not have a formally documented and widely-accessible air warfare strategy, nor does it have many publicly identifiable strategic thinkers. Such weaknesses were dictated by the previous BNP-led government, and not enough attention is given to how BAF can offer input into the process which leads to its creation of a capable air force.

BAF officers were retrenched and prosecuted by the BNP-led government for recommending the procurement of fighter jets in the past.

Strategic imagination was almost entirely ignored during the recent MRCA tender floated by BAF which allows only Russia to participate with only one type of fighter jet. The Russians also used the opportunity to present a unfavourable deal to Bangladesh which led to delay or the withdrawal of the MMRA tender. For BAF to be able to fully defend the people of Bangladesh, this must change.

Read More Bangladesh Military: as inept as it is corrupt

Emphasis must be given to the establishment of air force bases, an air force command and communication centre, air traffic control independent of civilian air traffic control, training facilities, and, most importantly, medium and long-range air defense systems in order to protect national assets such as the Rooppur nuclear power plant, our transport infrastructure, seaports, and container terminals.

Read More   Bangladesh airspace can belong to anyone who wants it

Initiatives such as the procurement of medium multi-role fighter jets and air defense systems are critical given the circumstances. I believe BAF should re-evaluate the MMRA tender and allow Boeing and Saab Defense to participate in the bidding to supply at least a squadron of fighter jets and associated support infrastructure.

Pros: Gripen NG is a network-centric, Information Age fighter jet. The Gripen provides technological advantages over any other fighter jet available in this region. The Gripen NG is packed with an advanced radar and avionics suite that outmatches any potential opponent. It is packed with features and is armed with new generation air-to-air and air-to-ground munitions.

The Gripen also brings maritime strike capabilities in its portfolio. Sweden has been neutral in any direct political conflict which makes it easy to align with Bangladesh’s strategic goal.

Cons: The Gripen is not combat-proven. Sweden was never in Bangladesh’s defense spotlight.

Pros: F/A-18 is combat proven and widely used by many countries. The new generation F/A-18 is packed with advanced avionics, electronics, and software that outmatches any potential threats BAF may face in the future. The F/A-18’s unmatched capability to strike any naval assets is beyond doubt. The F/A-18 is also packed with a vast array of munitions to overwhelm the enemy with sheer firepower.

Cons: Although the current political environment in Washington, DC is favourable to Bangladesh, the F/A-18 comes with a political clause in the future acquisition of any F/A-18 armaments. As long as Bangladesh remains a democratic nation, political risks can be mitigated, and support systems can be outsourced from a third country.

BAF should deploy the systems, sensors, and networks to demonstrate efficient air and situational awareness around Bangladesh. The more technologically-advanced capabilities will characterise the future of BAF for intelligence, surveillance, war-fighting, reconnaissance systems, and long-range air defense and strike weapons employed by the air force.

© 2017 – 2020, GDC. © GDC and www.globaldefensecorp.com. Unauthorized use and/or duplication of this material without express and written permission from this site’s author and/or owner is strictly prohibited. Excerpts and links may be used, provided that full and clear credit is given to www.globaldefensecorp.com with appropriate and specific direction to the original content.

On the 23rd December 2019 at the Flight Test Centre of Leonardo Aircraft Division in Turin-Caselle, the first Instrumented Series Production Aircraft (ISPA 6) equipped with the Kuwait Air Force configuration has completed its first […]

Noted on a Google Earth photo from 7 May 2020, four Su-35S in a two-tone blue camouflage scheme intended for the Egypt Air Force can be seen outside the KnAAZ Gagarin Aircraft Plant in Komsomolsk-on-Amur […]

The Visby-class ship’s design heavily emphasizes low visibility, radar cross-section and infrared signature. The first ship in the class is named after Visby, the main city on the island of Gotland. The class has received widespread international attention because of its capabilities as a stealth ship. […]

Copyright © 2020 Global Defense Corp. All rights reserved. No part of this publication may be reproduced, distributed, or transmitted in any form or by any means, including photocopying, recording, or other electronic or mechanical methods, without the prior written permission of the publisher, except in the case of brief quotations embodied in critical reviews and certain other non-commercial uses permitted by copyright law.