The Su-57 first flew in 2010 and had experienced considerable trouble during its development period. Things got so bad that the Indian Air Force, a frequent buyer of Russian military hardware and partner in the program, wants to bail on the project.

Russia claims that it will soon join the very exclusive stealth club with the imminent arrival of its fifth-generation fighter, the Su-57. Russia has placed 12 firm order of Su-57 fighter jet.

Stealth technology allows a pilot to shoot at another aircraft without the enemy having the ability to shoot back because they cannot see them. Stealth refers to the inability of the enemy to detect the aircraft, commonly by radar. The smaller the radar cross-section of an aircraft, the more difficult it is to detect and the stealthier it is considered to be. Stealth does not mean invisible though; stealth means less visible from a certain distance of an adversary’s aircraft.

In the year 2010, Sukhoi Design Bureau added some exterior stealth characteristics–having a fuselage made of composite materials coated in radar absorbent paint. 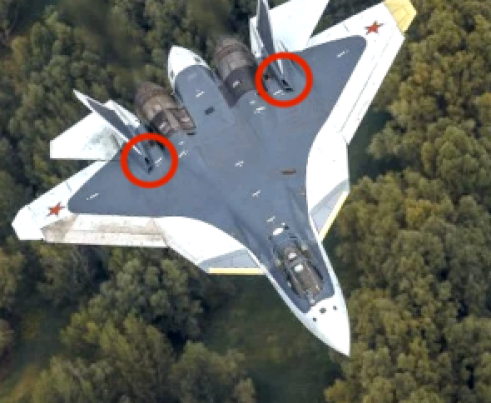 There is a sizeable structure beneath the moving portion of the fins. Some space will be needed for the hydraulic actuator which moves the fins, but there is a lot of space in there, so its no surprise that there are avionics boxes inside as well. The larger the amount of equipment, the greater the cooling requirement, but air inlets limit the efforts to reduce radar cross-section. If you compare Su-57 to the F-35, you will notice that there is a limited number of holes in the external structure.

The engines are exposed and detectable by IR sensors. Since the aircraft can’t hide its signature and the radar at front radome does not cover more than 90 degrees, a small radar has been fitted at the rear radome of the aircraft to detect whether the aircraft has been pursued by another aircraft. 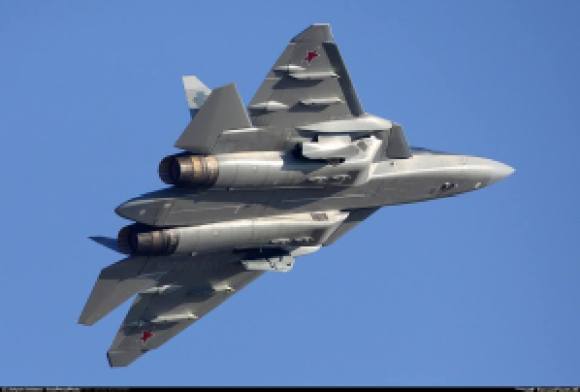 The stealth technology of Su-57 is more of advertising technology. The aircraft is still visible to a certain extent, but modern Gallium Nitride technology based AESA radar such as Raven ES-05.

You would not generally want to have a separate canopy break in a production stealth airframe, but you do see canopy break on a Su-57. Sukhoi used puttied fasteners on the vortex flap as a general lack of design finesse outside the airframe. 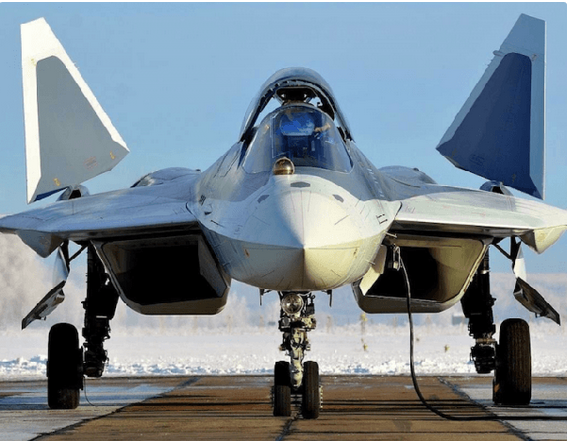 The problem is that the tunnel between is almost purely vertical which means that, unless you are operating exclusively over a friendly environment, anything looking up is going to get a multipath return that is too much of an inherent design compromise to the airframe configuration to be ameliorated.

Take a closer look at the jet’s technical drawings to be sure; there is not enough serpentine in the inlet trunking to mask the engine face, even with the very long visible ducts. By itself, this is a disaster design concept to be called a stealth aircraft.

The camouflage on the Su-57 looks like paint. It’s crudely applied in some areas, and it’s very diversity of colour patterning means it’s going to be subject to divergent thermal as well as RF behaviours, due to the size of pigment balls. The engine exhaust is also visible similar to the Su-35 which make it visible by a modern IRST.

According to Michael Kofman, a senior research scientist at the think tank CAN, Su-57 will be a step above a fourth-generation aircraft – regarding how manoeuvrable it is, Russian aircraft are always quite capable, very manoeuvrable. However, the Su-57 does not pose any severe threat to other fifth-generation fighter jets with superior electronics, situational awareness, and stealth capability.

The Supercruise is the ability to cruise at supersonic speeds without using engine afterburners. At the core of every plane is the engine – it is all about the engine.

The Saturn/Lyulka 117/AL-41F1 engine that has powered Su-57 has many maintenance issues. Indian Air Force (IAF) always complaint about Russian engines. Russian engines have been smoky and require many hours of maintenance. Su-57 has not designed modular aircraft for an engine to be replaced quickly without attention from a skilled engineer from MRO facilities.

While writing this article, Su-57 was not capable of supercruise. Su-57 used its afterburner when required.

Su-57 does not house a single AESA radar and sensor to support the pilot rather than a single radar installed on its nose cone; there’s an L-band active phased antenna array (which is the same antenna array of Su-35) housed in it. There are two more arrays on either side of the cockpit and an additional pair on the wings. Russian media claim these sensors allow the Su-57 to detect as many as 60 targets 400 km away. The Su-57 is yet to be capable of integrating with off-board and onboard sensors, datalinks and digital information systems.

For some time, the Su-57 program had been criticised as being the same engine, radar, avionics as the Su-35, but installed in a stealthy-looking airframe.

Gallium Nitride (GaN) is a new semiconductor compound that can amplify higher power radio frequency signals than GaAs at microwave frequencies. It is expected to have more significant output power compared to GaAs; theoretically, if GaAs module can transmit 10 watts, a GaN sibling module can transmit 50 watts.

The manufacturer of Radar, NIIP product brochure mentions GaAs T/R modules being used for Su-57’s primary radar. Su-57 is yet to be proved any off-board digital data exchange and sharing with other aircraft.

All stealth fighters are still vulnerable to infrared guided missiles in a WVR combat. Both Russian and Western Fighter jets have IRST.  The Russian Aircraft carry more armament than western Aircraft making it less stealthy than western counter-part. In WVR combat, Su-57 bleed energy for not having supercruise capability than Western Fighter Jet, but in a BVR combat, the very stealthy fighter has the upper hand and capable of engaging enemy fighter jet before it can detect another stealth fighter.

The greater range of the Russian K-77M may be an advantage, but not against a low-observable stealth fighter, but the NATO already fielded superior ramjet-powered Meteor BVR air-to-air missile that can defeat low observable aircraft. Su-57 will operate closer to ground-based positions, which may be acceptable given Russia’s security posture and supported air defence systems.

The Su-57 is a work in progress, its final capabilities unclear. In other words, said one Russian aerospace analyst, “It looked like a next-generation aircraft, but below the surface, it was less than what it appeared.”

© 2018 – 2019, LM Publications. © GDC and www.globaldefensecorp.com. Unauthorized use and/or duplication of this material without express and written permission from this site’s author and/or owner is strictly prohibited. Excerpts and links may be used, provided that full and clear credit is given to www.globaldefensecorp.com with appropriate and specific direction to the original content.

Vladimir Putin has reportedly slipped and fallen down several stairs at his official residence, according to claims from a so-called Kremlin insider. According to the report, the 70-year-old cancer hit Russian tyrant was allegedly helped to a […]

After the utter destruction of Mariupol, the second stage of Russia’s invasion of Ukraine is underway. The scope of the war now appears to be establishing complete control over Donbas and southern Ukraine. If successful, […]

Russia’s only aircraft carrier, Admiral Kuznetsov, has been plagued by breakdowns and mishaps. Despite those problems and broader changes to its navy, Russia is committed to the carrier’s future in a record-breaking fifth attempt to […]

The German government officially confirmed that the country plans to supply the newest RCH 155 self-propelled howitzers and artillery rounds to Ukraine. The details were given in a 7 December media release, to announce that […]