Janes 360 reported that China’s Wuchang Shipbuilding Industry Group has launched the third of four Shadhinota-class corvettes on order for the Bangladesh Navy (BN), according to a news report published on the sina.com website. The Shadhinona class is a customised variant 13B of type 056 Corvette of Bangladesh Navy.

Bangladesh Navy: A junkyard of Chinese navy but a business entity of Bangladesh Military 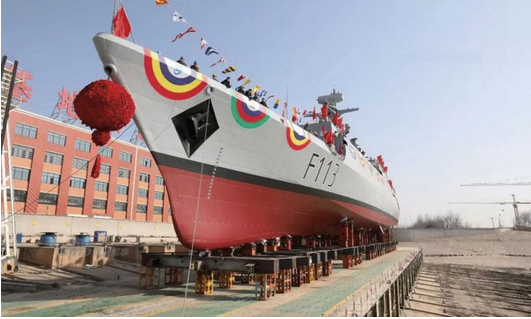 The launch ceremony for the 90 metre long BNS Shongram Corvette – with pennant number F113 – was held on 12 February at the company’s shipyard in Wuhan, said the report.

The vessel follows BNS Shadhinota (F111) and BNS Prottoy (F112), both of which were launched in Wuhan in late 2014 and were commissioned into the BN in March 2016, according to Jane’s Fighting Ships .

The new ship of the class is appeared to be equipped with a more advanced phased-array radar, which, according to sina.com, could be the SR2410C 3D multifunctional radar, although no official confirmation has emerged.

© 2018 – 2020, GDC. © GDC and www.globaldefensecorp.com. Unauthorized use and/or duplication of this material without express and written permission from this site’s author and/or owner is strictly prohibited. Excerpts and links may be used, provided that full and clear credit is given to www.globaldefensecorp.com with appropriate and specific direction to the original content.

Since the Doklam standoff with India in 2017, the Chinese military has expanded its arsenal with weapons like the Type 15 tank, Z-20 helicopter and GJ-2 drone that should give China the advantage in high-altitude conflicts should […]

China’s Next Aircraft Carrier Could Be Nuclear Powered

China’s next aircraft carrier is likely to be nuclear powered, according to two people close to the People’s Liberation Army (PLA). After a two-year delay because of technical problems, construction work on the vessel resumed earlier this year, […]

The Trump administration is close to issuing a list of 89 Chinese aerospace and other companies that would be unable to access U.S. technology exports due to their military ties, Reuters reported, a move that could […]

The German government officially confirmed that the country plans to supply the newest RCH 155 self-propelled howitzers and artillery rounds to Ukraine. The details were given in a 7 December media release, to announce that […]